The Campaign Rinat Akhmetov for Children: a Longstanding Tradition of Kindness and Care for Children

This year, more than 100,000 girls and boys received gifts and congratulations on New Year’s holidays from Rinat Akhmetov. The largest New Year tradition of kindness and Rinat Akhmetov’s personal participation in the lives of children began on 16 November 2001. Back then, Rinat Akhmetov first visited children of boarding schools and orphanages and saw how much they were waiting for a miracle.

‘Helping children is at the heart of my charity efforts. In particular, more than 20 years ago, my Foundation began its activity with provision of help to orphaned children. Now this is a longstanding systematic work aimed at supporting the health and development of hundreds of thousands of children, especially those deprived of parental care and warmth. For me, there is no other people’s grief or misfortune, there are no other people’s children. That is why for many years I have been helping those who need help the most: the youngest, the most vulnerable one,’ said the founder of the Campaign and the Founder of the Rinat Akhmetov Foundation.

In the last 14 years, about 1 million children received gifts and congratulations from the best-known philanthropist of Ukraine.

This year, Mariupol has become the place where children’s wishes are fulfilled within the framework of the Campaign. For several hours, the children plunged into the fabulous atmosphere of the New Year’s holiday, and its centrepiece was a marvellous pre-New Year’s ball, with dances, tasty treats and pleasant gifts.

‘The focus of the Campaign Rinat Akhmetov for Children is on the children deprived of parental warmth. It is very important to help them discover their talents and give them confidence that they can achieve their goals and change the world for the better,’ said Iryna Blazhan, Project and Program Chief Director of the Rinat Akhmetov Foundation.

To make the celebration truly filled with the New Year spirit, the children not only adorned the location with Christmas decorations, but also filled it with their smiles and good mood. Fascinating quests, master classes and interactive performances for the youngest ones were a pleasant surprise for many kids.

Help to Children is One of the Foundational Principles of Charity

The Campaign’s invariable tradition is congratulations to the children of boarding schools, family-type orphanages, as well as young participants in the Foundation’s programs and projects. The Molyar family was one of the first this year who shared the New Year’s atmosphere together with the Rinat Akhmetov Foundation. For almost 10 years, Andriy and Natalya Molyar have been changing the fate of children, giving them warmth and love, creating family traditions that will remain with the children for life. 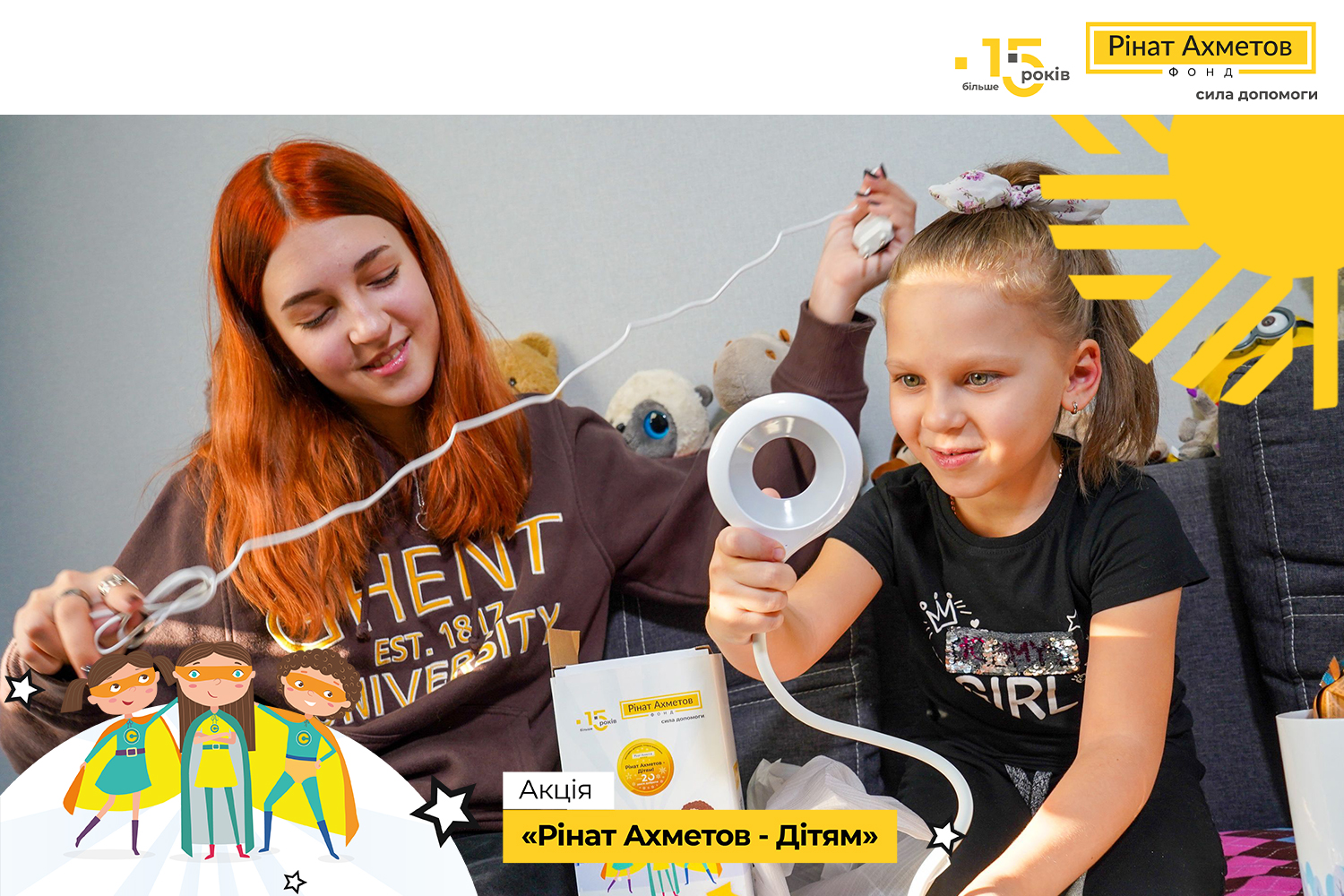 The Osmanov family was not left out either. They not only received gifts, but also prepared an incredible surprise especially for the Foundation. The family prepared a wonderful hand-made rose – the symbol of Donetsk. This touching gift will become part of the collection in the unique Museum of Civilian Voices of the Rinat Akhmetov Foundation. 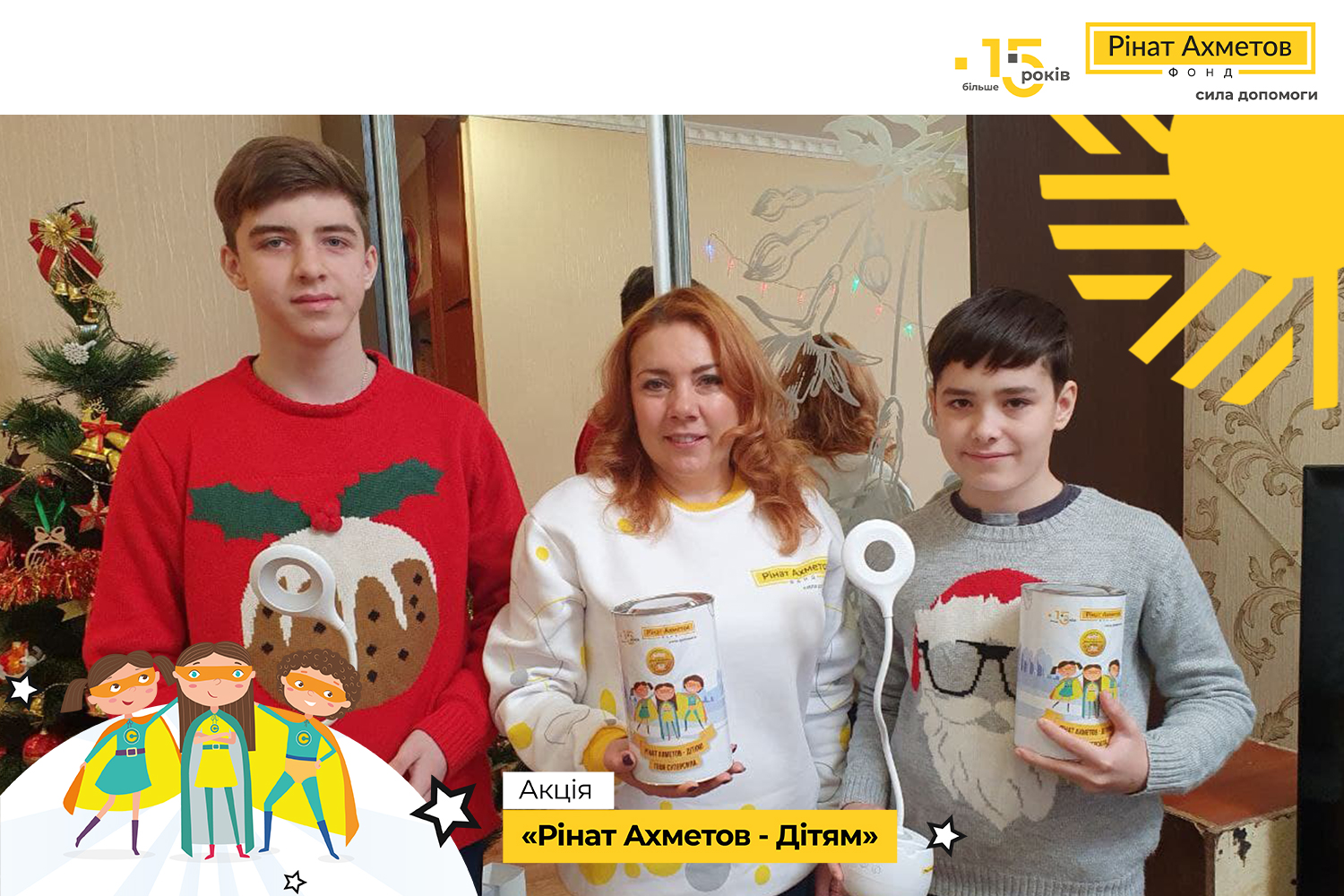 In addition, the inmates of Staromykolaivskyi educational centre (an orphanage in Donetsk region) received a special surprise in the framework of the Campaign. A real kaleidoscope of gifts awaited the kids. They received furniture for the playing corners, including a medical set Dr Powderpill and a kitchen set for young housekeepers. The inmates of the centre also received sets of toys. Young car enthusiasts received a set of cars and a garage, and young builders were given a builder set and models of wooden houses. And of course, some delicious gifts too!

‘Many thanks to the Rinat Akhmetov Foundation for such a pleasant New Year’s Eve surprise. It was a great joy for the kids,’ expressed her gratitude the director of the centre Inna Mikh.

The Campaign Rinat Akhmetov for Children is not only about fun and gifts, but also about something necessarily useful for children. Within the framework of its project, Rinat Akhmetov for Children. Your superpower, the Rinat Akhmetov Foundation has held a unique career guidance event – a motivational online lesson Your Superprofession. Its participants were schoolchildren of 8-11 grades, as well as teenagers from boarding schools and family-type orphanages from all over Ukraine.

‘The first motivational career guidance meetings in the framework of the Campaign were held in December 2018. Then the inmates of boarding schools in Donetsk region learned to discover their talents, received knowledge about how to choose a profession, took vocational guidance tests, and tried some popular and demanded professions. Their assistants in that were the Foundation’s ambassadors who are well-known TV presenters. To date, they have held 41 motivational meetings in nine boarding schools of Donetsk region. The meetings were attended by more than 1,000 teenagers,’ said Oksana Ishchuk, project manager of the Rinat Akhmetov Foundation.

The invited presenters of the online lesson Rinat Akhmetov for Children. Your Superprofession were Liliya Rebryk and Hrygoriy Herman, the stars of Ukraine TV channel. During the online lesson, the children not only got acquainted with some popular and well-known representatives of demanded professions, but also learned what needs to be done and what profession to choose in order to open up their talents as much as possible, realize themselves and become successful. During the lesson, a contest for the best question to the experts was held among the audience. Its winner was Danylo Zhygailo from Kostiantynivka (Donetsk region), who will receive a valuable prize – a modern tablet – from the Foundation. 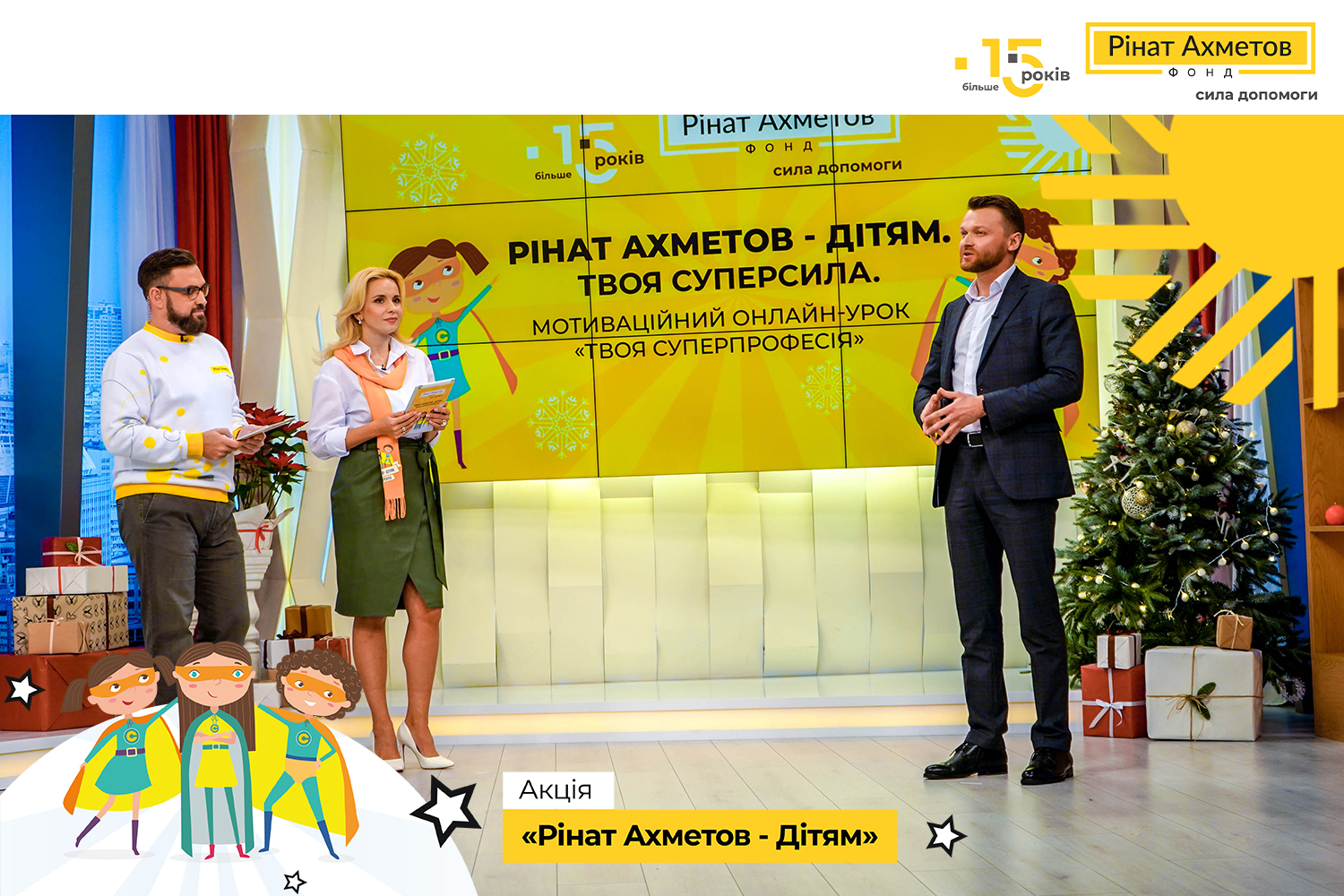 Last year, the Rinat Akhmetov Foundation produced an educational series Your Superprofession released in the framework of its project Rinat Akhmetov for Children. Your Superpower. In essence, the series is a new online format of the project, which is primarily meant for adolescents who need to put in a lot of effort in this life to realize themselves in the professional sphere.

‘The first season of the series not only made a huge impression, but also collected more than a million views. And this year, during the online lesson, the next season of the educational series was presented. The new season was expended to spotlight such popular modern professions as a storyteller, presenter/interviewer, photo/video editor,’ added Oksana Ishchuk.

One of the participants of the online lesson was a graduate of the project Rinat Akhmetov for Children. Your Superpower. Vladyslav Kharkivskyi, a graduate of Oleksiyevo-Druzhkivska special school No. 13, shared his personal experience in choosing a profession, and also was able to inspire the participants to their own achievements. A very pleasant surprise for teenagers was a video message from world-class football stars, FC Shakhtar players Andriy Pyatov and Anatoliy Trubin, as well as singer Alina Pash. They showed by their own example that it is absolutely possible to achieve the set goals.

During the broadcast, the lesson was watched by more than 5,000 viewers. Thus, the motivational online lesson Your Superprofession became the most popular, most viewed one, and set a national record in Ukraine.

The Campaign Rinat Akhmetov for Children is a personal initiative of Rinat Akhmetov. This tradition is more than 20 years old. Over the years of the Campaign’s existence, its format changed, but its goal and philosophy – to give warmth and care to children – have remained unaltered.

The Rinat Akhmetov Foundation: Premiere of the Second Season of Your Superprofession Series
See more