The Rinat Akhmetov Foundation in 2021: the Power of One Person Help

The Rinat Akhmetov Foundation sums up the results of its activities undertaken in 2021. Assistance to the country in the fight against the coronavirus epidemic remains one of the priority areas. Two years ago, Ukraine faced a global threat and Rinat Akhmetov was the first to come to the country’s aid.

To address the most essential healthcare needs of the public healthcare sector, he pooled together the resources of his Charitable Foundation, FC Shakhtar and other SCM Group’s businesses. In a short time, the Foundation created the project Fighting COVID-19 in Ukraine, which became part of the program Rinat Akhmetov – Saving Lives. The project is unique for the country. This is the largest, most systematic and widest scale private initiative aimed at helping public healthcare facilities in the fight against the coronavirus.

‘Rinat Akhmetov allocated about UAH 500 million to fight COVID-19 in Ukraine. Thanks to this, the Foundation helped about 1.5 million people survive. This is the largest contribution of one philanthropist to the public healthcare sector of Ukraine since independence,’ said Iryna Blazhan, Project and Program Chief Director of the Foundation. 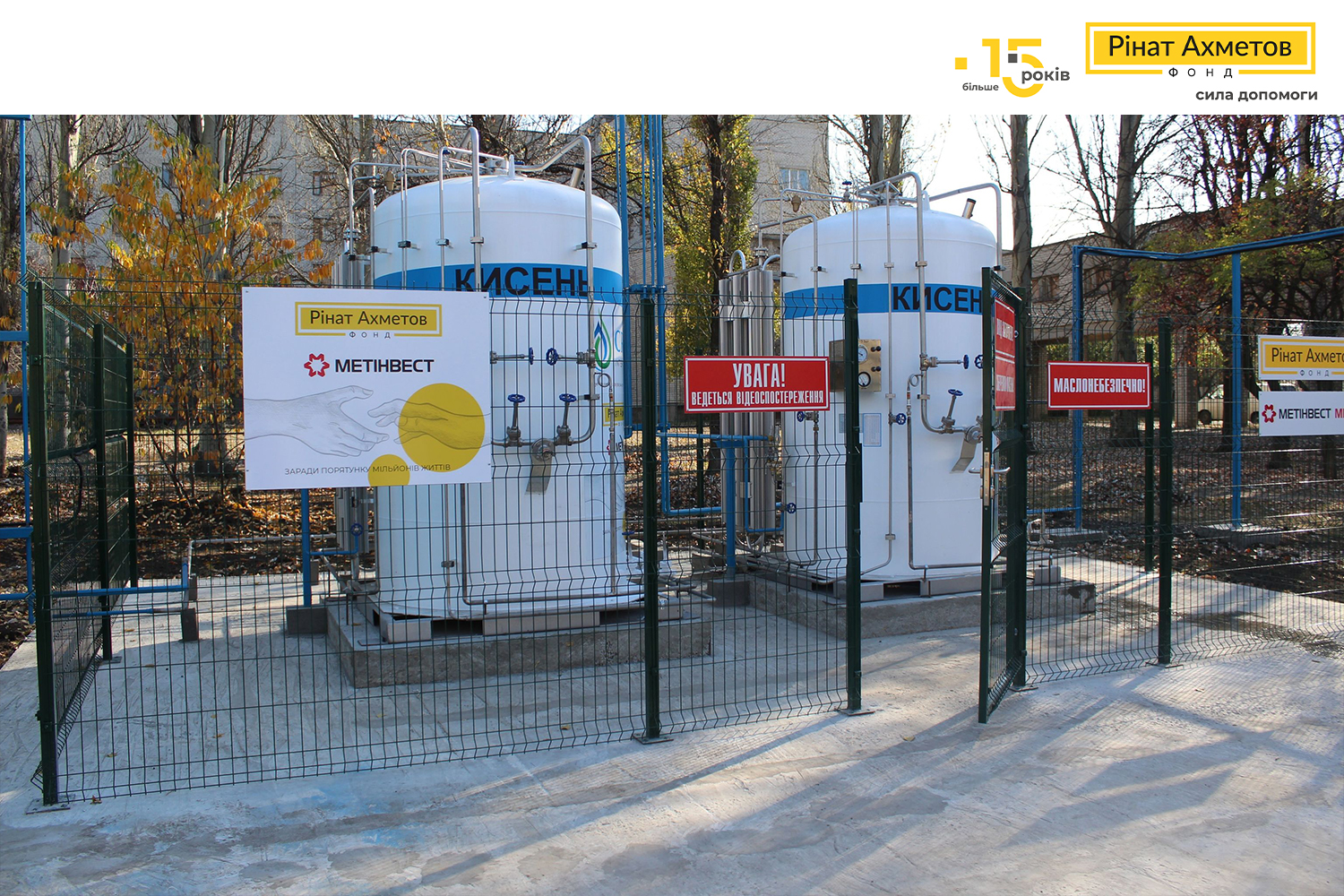 In total, over 500 healthcare facilities across the country received more than 1,000 pieces of equipment in the framework of the project. Public hospitals received more than 200,000 units of personal protective equipment. In addition, doctors received 337,000 rapid COVID-19 tests and 1,044 units of medical and laboratory equipment from the Foundation. Supply of lung ventilators and oxygen to hospitals remains a separate important area. To date, the Foundation has donated 217 modern ventilators and over 150 oxygen concentrators to doctors. 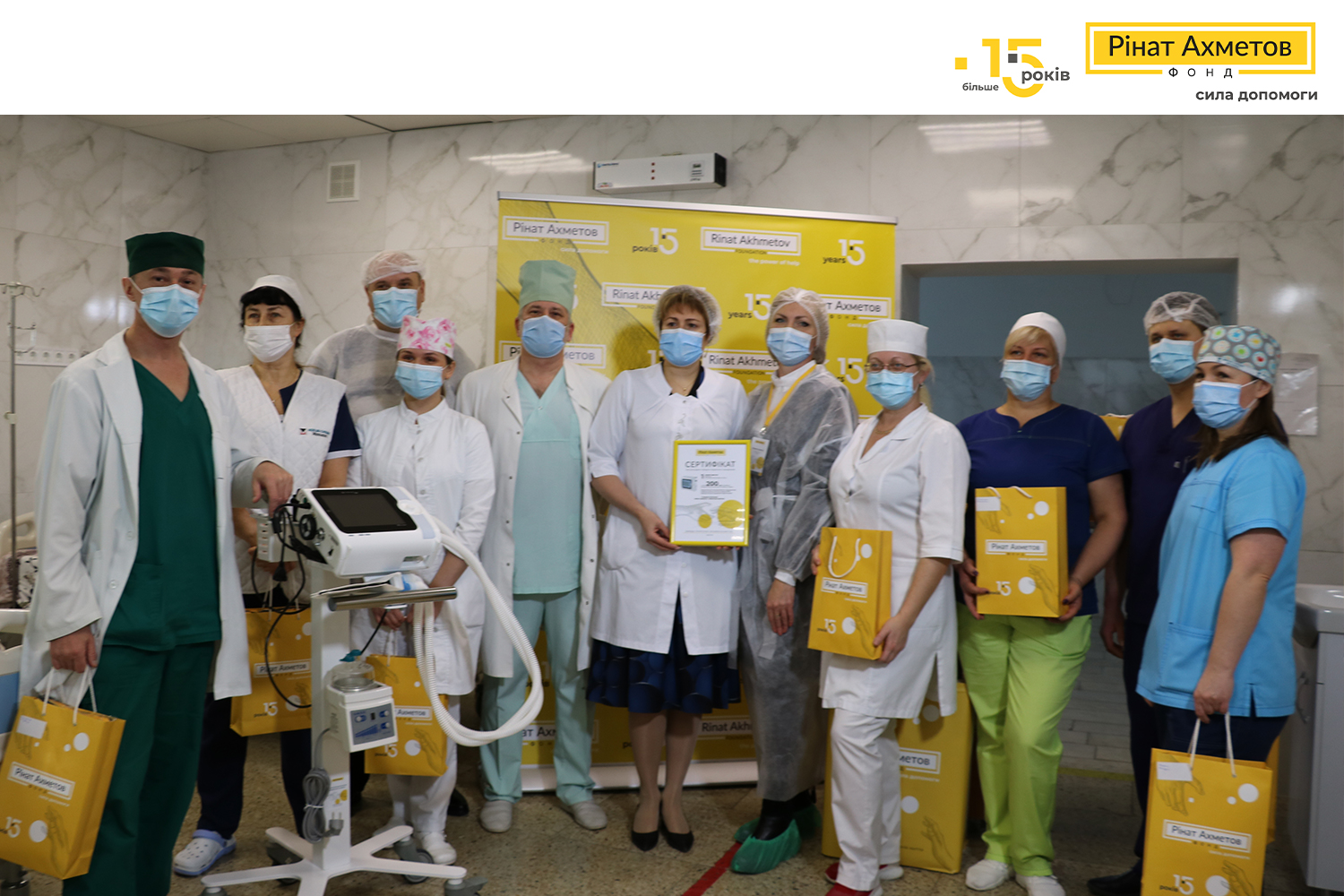 According to Iryna Kulesh, the acting Chief Physician of Zaporizhzhya Regional Infectious Diseases Clinical Hospital, modern ventilators continue to play an important role in the treatment of patients with the coronavirus infection.

‘I want to express my deep gratitude to the Rinat Akhmetov Foundation. Your help is very valuable and significant. Lung ventilators are very much needed today because the percentage of severe patients has increased significantly. They need both oxygen therapy, and, unfortunately, artificial lung ventilation too,’ says Iryna Kulesh.

Another area of the Foundation’s activity in 2021 was its awareness-raising effort in the field of combating cancer. To that end, the project #RAKNEVYROK was launched jointly with VOGUE magazine and with the support from TSUM Kyiv. It became a continuation of the Foundation’s program CANCER CAN BE CURED. Launched in 2008, it was the first and largest program in Ukraine to help adult cancer patients. Thanks to the program, diagnostic equipment for Ukrainian oncology dispensaries and equipment for complex surgery operations was purchased, and a mobile women’s consultation was also launched. In total, within the framework of the program, the Foundation helped 1 million citizens of the country survive.

The main objective of the project #RAKNEVYROK is to show, using the real stories of its heroines as an example, that life after a diagnosis is possible and that cancer can definitely be defeated. The project also aims to provide psychological support to those who are already fighting the disease, and to remind Ukrainian women about the importance of regular health examinations since early diagnostics save lives and health. Within the framework of the project #RAKNEVYROK, the country’s best healthcare specialists give their advice on how to accept the diagnosis and start fighting the disease.

Preserving the memory In 2021, the Week of Civilians was held in Ukraine by the Rinat Akhmetov Foundation for the fourth time. This time it was part of the unique project the Museum of Civilian Voices of the Rinat Akhmetov Foundation. Its main goal is to draw the attention of the world community to residents of Donbass whose fate the armed conflict changed dramatically. For the first time in Ukraine, the online museum objectively and fully documents the stories of people who suffered from the hostilities. It is a space where Civilians can openly share their personal stories and thus can free themselves from the burden of silence. The museum is a source of true stories told in the first person, with the own voices of people who have gone through the horrors of the armed conflict.

This year the Week of Civilians was full of events. Alleys of roses appeared in Vinnytsia and Kharkiv, planted at the initiative of the Foundation. Roses are a symbol of Donetsk and the people who had to leave their homes. For schoolchildren the Foundation held the Ukraine-wide essay competition One Day. One of the main events was the opening of the sonic art installation Going Home in Gurova Park of Mariupol city. 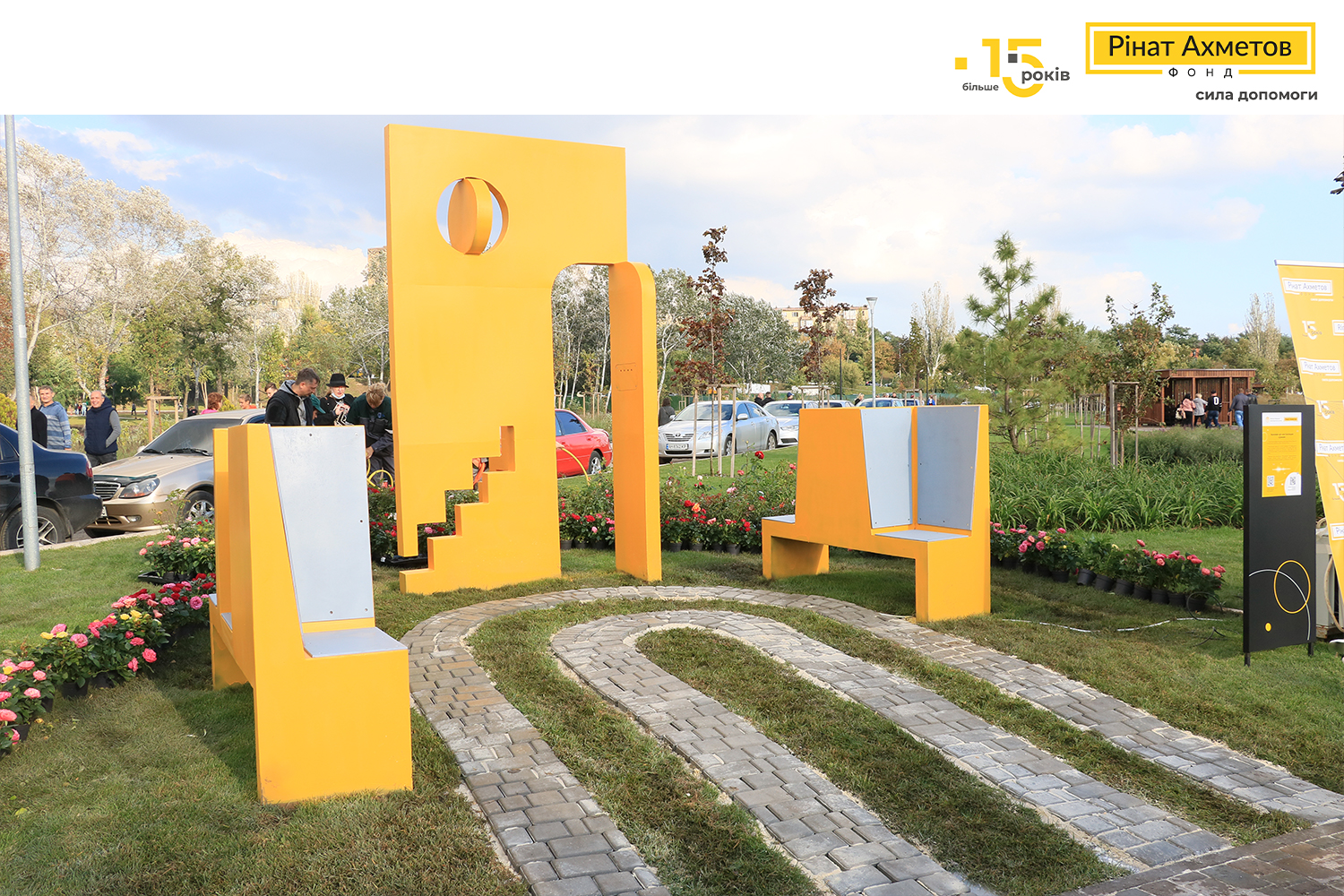 ‘It symbolizes the hope for the return home of those people whom the war forced to leave their native land. It is a transition from one way of life to another. We invite everyone to go through the installation and, perhaps, feel something important for themselves, as well as recall and comprehend the events that have taken place. In addition, this installation is about the importance of communicating with each other, about how our stories change the course of life of the entire country,’ said project coordinator Kateryna Ray.

Roses were planted around the installation, and the construction itself was equipped with an audio system that enables everyone to hear the stories of Donbass civilians collected in the Museum of Civilian Voices.

The Foundation’s goal is to document 100,000 testimonies, accounts of Donbass civilians, of which more than 10,000 have already been collected. This is the largest collection of Civilian Stories in Ukraine. It is important to keep all these stories so that they are never repeated, in the name of a better future.

In 2021, the Foundation continued its longstanding and uninterrupted tradition of kindness and pre-New Year’s celebrations – the Campaign Rinat Akhmetov for Children. Its focus is on inmates of boarding schools, family-type orphanages, as well as small and young participants in the Foundation’s programs and projects. This year, more than 100,000 children will receive gifts and congratulations from the best-known philanthropist of Ukraine. Over the last 14 years, their number reached 1 million people! 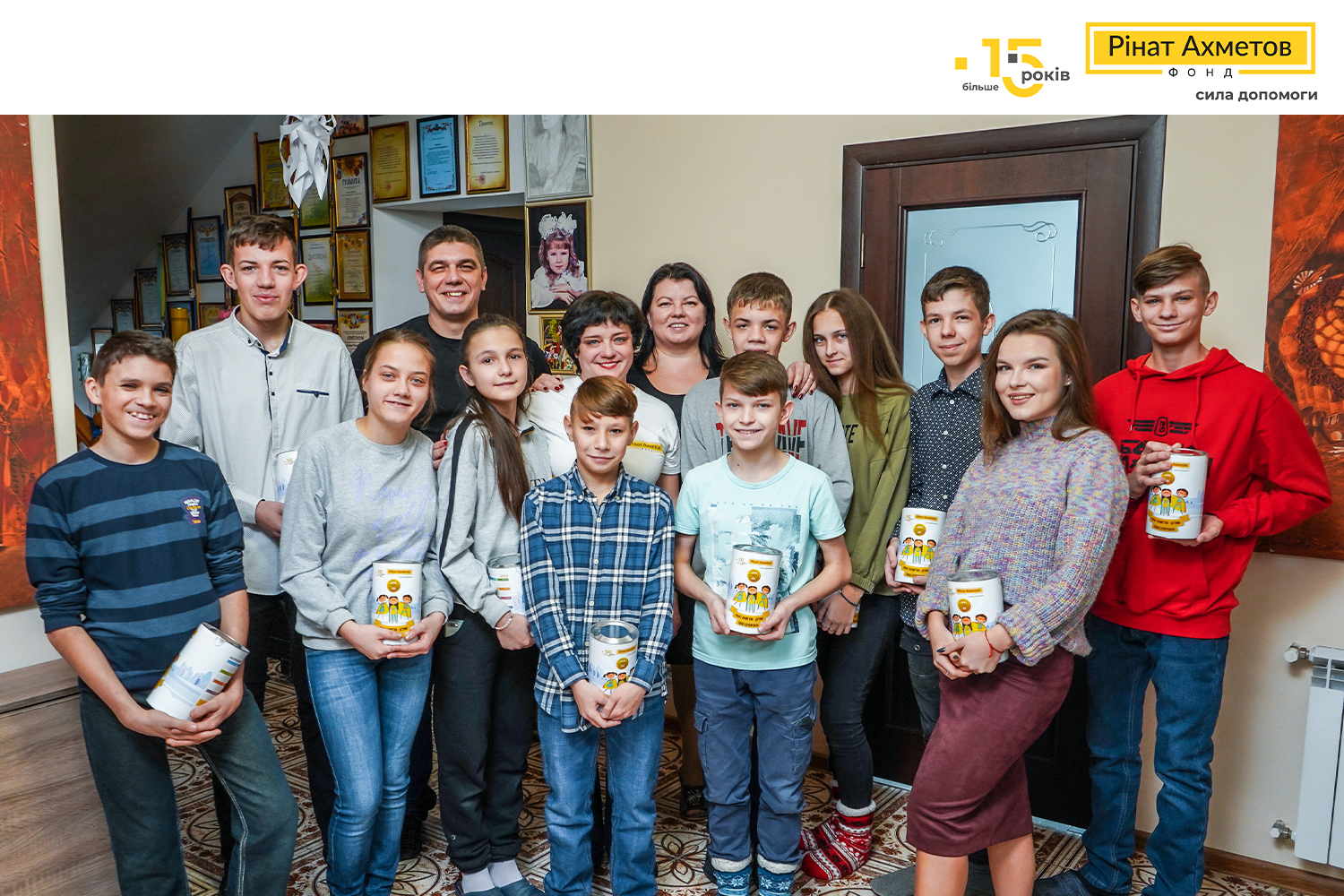 Rinat Akhmetov explains his philosophy of helping children as follows, ‘Help to those in need cannot be postponed until later. We were so much taught that children are our future that we really believed in it. But this is not so. Children are our present, and we are responsible for the future, for their future.’

A special event of this year was a grand New Year’s ball in Mariupol. In addition, a unique all-Ukrainian online lesson Rinat Akhmetov for Children. Your Superprofession was held as part of the Campaign. It was hosted by Liliya Rebryk and Hrygoriy Herman, the stars of Ukraine TV channel. The participants of the lesson got acquainted with some popular and well-known representatives of demanded professions. With the help of tests, they learned how to determine their own strengths and weaknesses. They also learned what needs to be done and what profession to choose in order to open up their talents as much as possible, realize themselves and become successful in the future. During the broadcast, the lesson was watched by more than 5,000 viewers. Thus, the motivational online lesson Your Superprofession became the most popular, most viewed one, and set a national record in Ukraine.