"Ventilators are among the top medical necessities the country requires. Therefore, the Foundation has purchased 200 modern artificial ventilation devices for Ukraine. In general, 200 ventilators are a key pillar of Rinat Akhmetov's assistance in the fight against COVID-19 within the framework of the program Rinat Akhmetov – Saving Lives", Natalya Yemchenko, member of the Supervisory Board of the Foundation, said.

According to her, 32 ventilators are being transferred to state healthcare institutions in six oblasts. This is the largest batch that has crossed the border of Ukraine since the quarantine began.

The SCM representative, Oleksandr Vyshniakov, awarded the certificate to the Chief Doctor of the Hospital, Kateryna Vyshnevska, to receive ventilators. 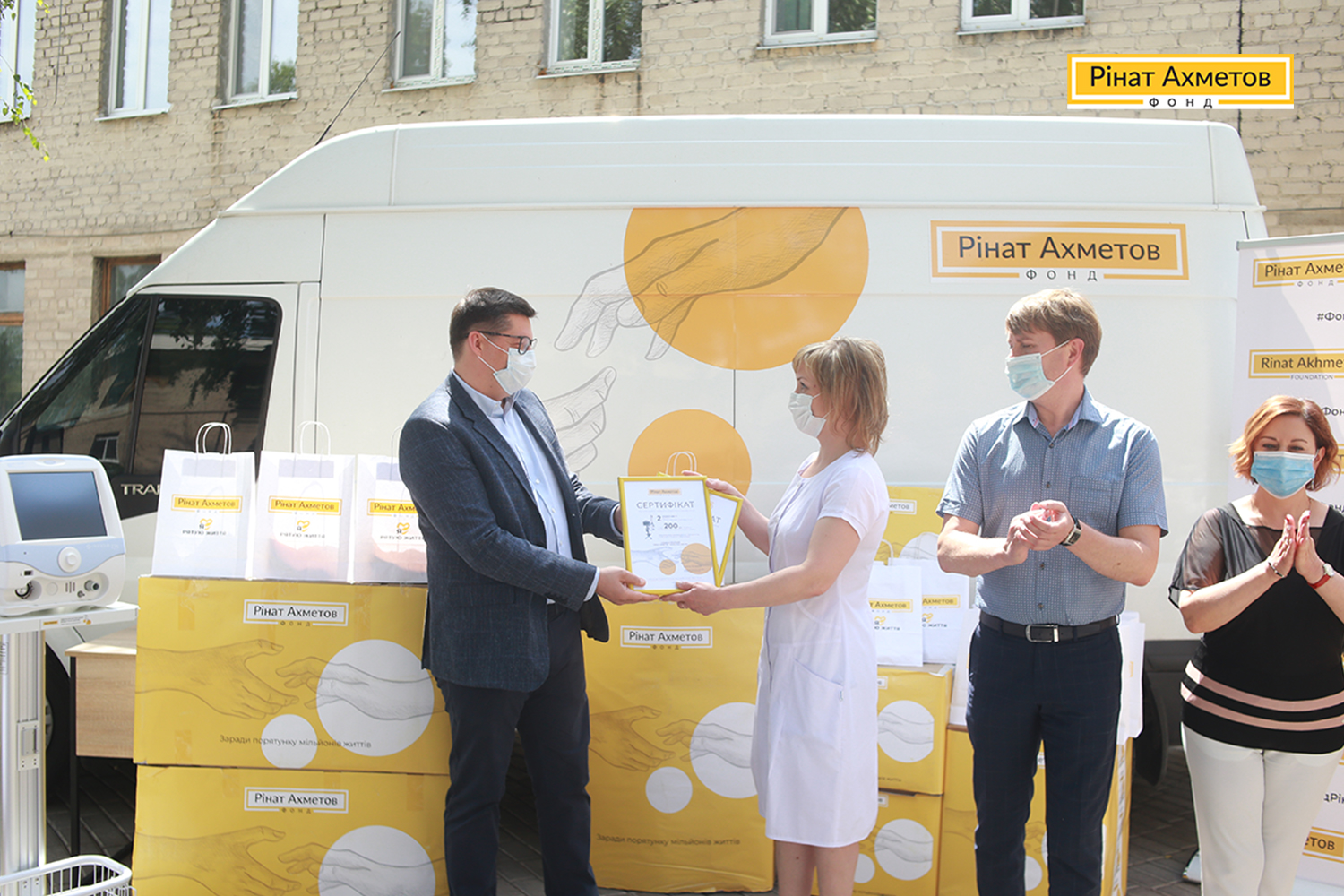 "This is high-quality equipment that is difficult to purchase since they are crucial in every country throughout the world due to the pandemic. On behalf of the Founder of the Foundation, Rinat Akhmetov, I would like to express my gratitude to the doctors once again," Oleksandr Vyshniakov said.

Kateryna Vyshnevska told why this particular assistance from the Foundation remains extremely relevant:

"We would like to express our deep gratitude to the entire team. Ventilators will allow us to provide full medical care to patients with detected pathologies and respond to the changes of their condition in a timely manner.

According to Mayor of Myrnohrad, Oleksandr Brykalov, the assistance the Rinat Akhmetov Foundation provides for the region comes at the right time:

"We have heard the idiom ‘A friend in need is a friend indeed’ not once before, but understand its meaning with advancing age. Today's event can only confirm it. When the trouble came to Ukraine, doctors were not left alone to deal with this problem. They have been supported by our friends who supplied such scarce and up-to-date equipment that is now crucial to save people's lives throughout Ukraine. We really appreciate this!

Mayor of Myrnohrad was supported by Deputy Head of the Health Department of Donetsk Regional State Administration, Maryna Kornieieva.

"Modern medical equipment, such as ventilators, plays a tremendous role in providing high-quality medical care. They are intended to treat patients with severe diseases. In these difficult times, a lot of humanitarian organizations provide assistance to our hospitals. However, the most significant and unprecedented assistance is rendered by the Rinat Akhmetov Foundation. Ventilators for Donetsk Oblast from the Foundation are the most significant contribution to the modernization of hospitals in the region. On behalf of the Department of Health, I would like to express my deepest gratitude," Maryna Kornieieva added.

Oleksandr Vyshniakov also presented training certificates to three anesthesiologists of Myrnohrad Infectious Hospital on behalf of the Foundation, certifying the completion of a special course allowing operating the advanced models of ventilators. The Rinat Akhmetov Foundation organized it jointly with the Ministry of Health and the Association of Anesthesiologists of Ukraine. Leading experts of the Ministry of Health shared the world's best practices with doctors of state medical facilites to treat COVID-19 and the aspects of how to operate the latest versions of ventilators. Over 800 doctors from all over Ukraine took part in online training from the Foundation. 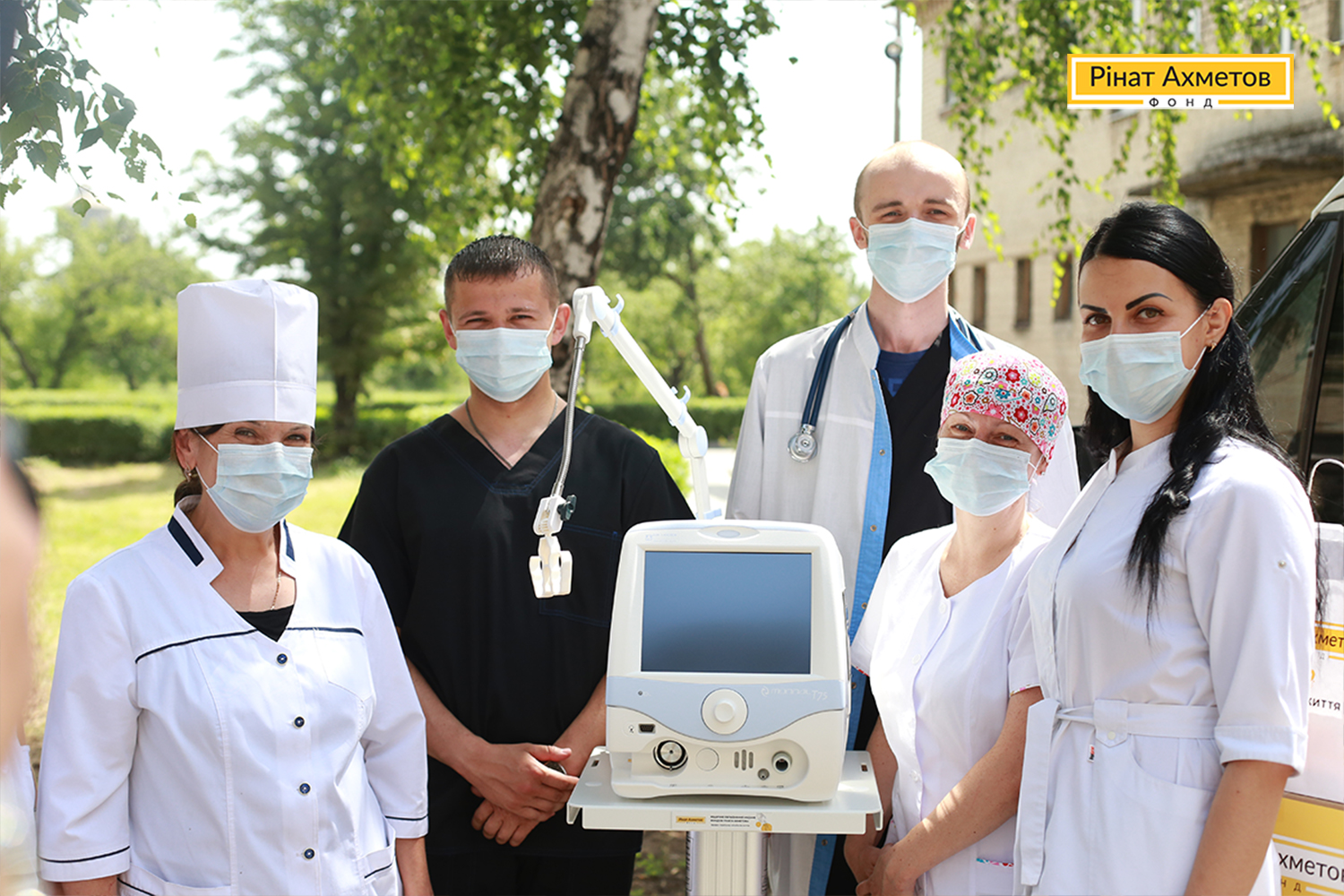 "We really appreciate this online training which contained a lot of valuable and useful information necessary for us to do our job. I gained new knowledge and adopted the best practices of the leading specialists of Ukraine," Doctor Yuliya Tokar expressed her gratitude.

At the end of the event, doctors of Myrnohrad Infectious Hospital received a special gift from the Foundation – certificates for sets of medical overalls. Doctors will be able to use the QR code to select the necessary custom-ordered clothing sizes.

Doctors from Lviv, Ivano-Frankivsk, Kramatorsk, Kostiantynivka, Bakhmut, etc., have reportedly received ventilators from the Rinat Akhmetov Foundation. In total, 200 high-end units of the of this equipment will be transferred to state healthcare institutions.

Fighting COVID-19 in Ukraine is a large-scale project of the Foundation created to help save people's lives. It is implemented within the framework of the program Rinat Akhmetov – Saving Lives. Earlier, Rinat Akhmetov launched 200 Ambulances for Ukraine, which was implemented as part of this program. Back then, all regional state medical institutions received 200 special vehicles with state-of-the-art military equipment that can get over off-road conditions within the record time of six months. Moreover, 22 vehicles equipped with ventilators for newborns were also delivered. This is the largest contribution made by one philanthropist to the state medicine of Ukraine since our country became independent. These days, many of these ambulances are involved in the fight against the coronavirus epidemic.

Learn more about the Rinat Akhmetov Foundation's assistance in Ukraine to fight the coronavirus here.