The Rinat Akhmetov Foundation Is the Best-Known Charity in Ukraine. It Is Known to 94% of Ukrainians, a Pre-War Survey Shows

According to a national-scale representative survey made by Info Sapiens in Ukraine in December 2021, the most known charitable organization in both Ukraine and Donbass is the Rinat Akhmetov Foundation. It is known to 94% of the Ukrainian population and 97% of Donetsk and Luhansk regions’ residents.

The second place by public recognition belongs to the International Committee of the Red Cross that is known to 70% of Ukrainians, and Viktor Pinchuk Foundation holds the third place (45%).

The list includes only those organizations that scored more than 1% in the random recognition survey in Ukraine. If the survey was conducted now, we are sure that the list would include Return Alive Foundation and other charities that help the Ukrainian Armed Forces, but before the war, they received less than 1% of random recognition. 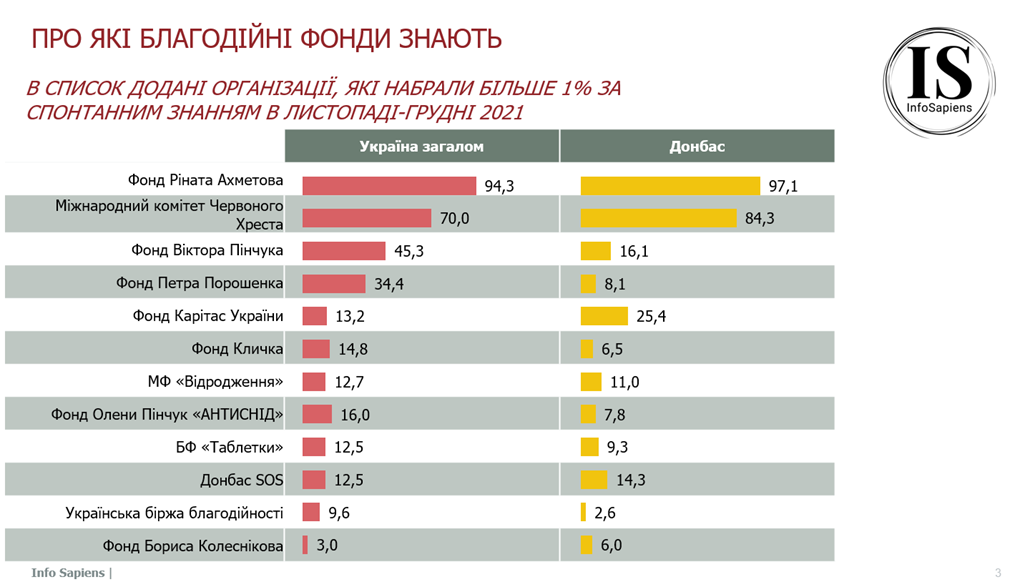 We also read the characteristics of foundations to the respondents and asked them to say which charity is most associated with this or that characteristic. The Rinat Akhmetov Foundation is more often associated with all the quoted characteristics than all other charitable organizations taken together. Thus, 64% of the population of Ukraine and 81% of the population of Donbass believe that the Rinat Akhmetov Foundation is the largest private charity in the country, and 50% and 59% accordingly consider it the charitable organization of the largest scale in Ukraine.

The Rinat Akhmetov Foundation is also often associated with helping children. Thus, 43% of the population of Ukraine and 63% of the population of Donbass believe that the Foundation focuses on helping children; 42% and 53% respectively – that it is a leader among charitable organizations in providing hearing aids to children; and 39% and 60% – that it is addressing the problem of orphanhood systemically. 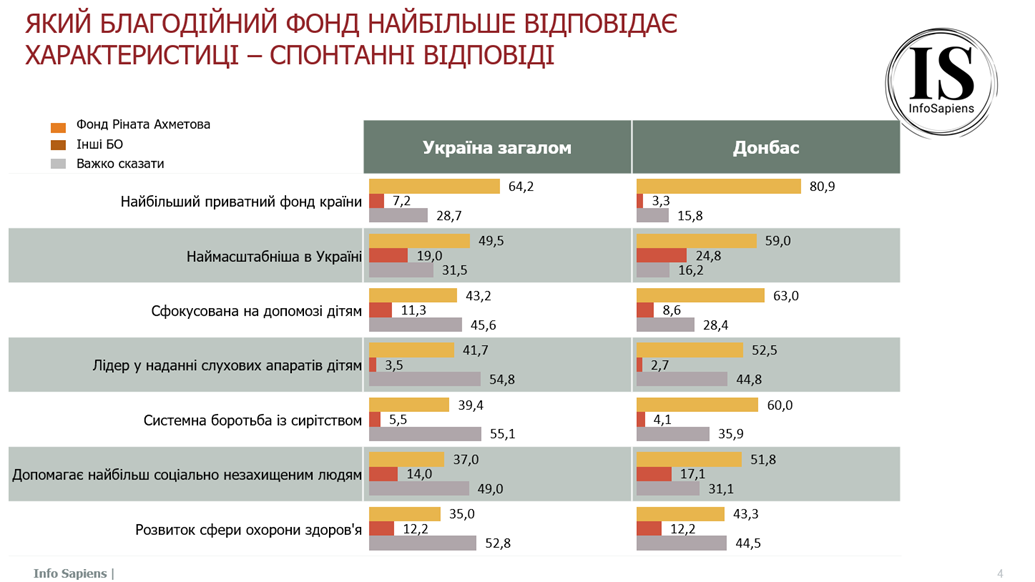 Information about the survey

In the framework of the survey, 3,208 respondents above the age of 18 were interviewed in person at their homes. In particular, 2,134 respondents were questioned in all the regions of Ukraine, except Donetsk and Luhansk regions, and 1,074 respondents were interviewed in Donetsk and Luhansk regions. The surveyed information for the whole of Ukraine was assessed in proportion to the population of each region. The sample is representative of the adult population of Ukraine by region, size of a settlement, gender and age. The Autonomous Republic of Crimea was excluded from the survey, and interviews in Donetsk and Luhansk regions were made only in the territories controlled by Ukraine. The maximum theoretical error is not more than 2.2% for Ukraine and 3.2% for Donbass. The survey was conducted from 24 November to 14 December 2022.