On 17 September, the Rinat Akhmetov Foundation presented the concept of a unique project – Civilians' Voices Museum. This is an online Museum whose task is to objectively and fully document the testimonies of civilians who suffered as a result of the armed conflict in Donbass.

"Today we will not be able to open a Museum in Donetsk, so we are creating it online. It will operate as an online archive, online exhibitions, online and offline projects, and also as a media. Rinat Akhmetov supported and is still supporting Donbass civilians. And he has no intention to stop. In 2014, the Humanitarian Center was established, which provided unprecedented assistance and, in fact, saved a million lives. During these six years, Rinat Akhmetov has heard the civilian stories about the war and words of gratitude from tens of thousands of times: in letters, stories, and social media posts. And now, to preserve these testimonies, the Civilians' Voices  Museum is being created, which is based on the stories of people who come from the mining region," Natalya Yemchenko, member of the Supervisory Board of the Rinat Akhmetov Foundation, said. 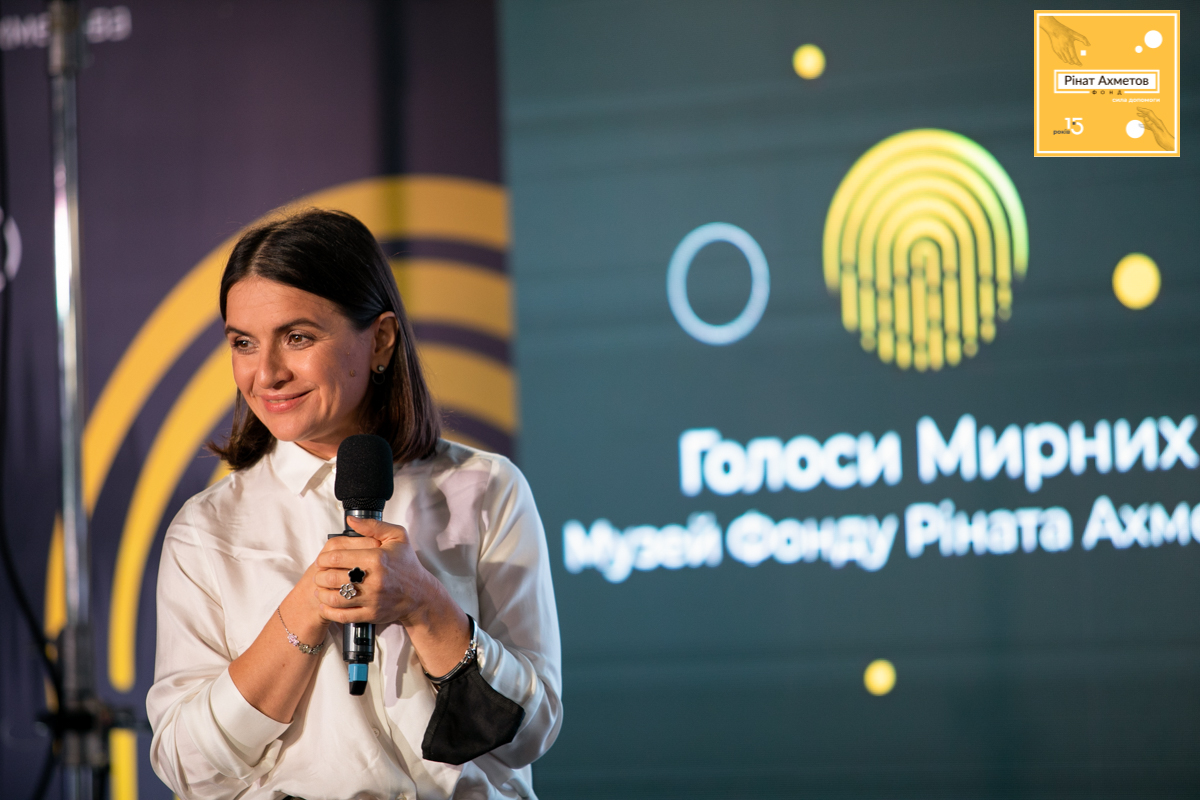 Historians, UNICEF representatives and the United Nations Office of the High Commissioner for Refugees, psychologists, ambassadors, people's deputies and media leaders attended the presentation held to be introduced to the concept of the Museum. Each of them got immediately immersed in the atmosphere of the Museum being created at the entrance to the hall allocated to the event. Photos of the civilians who had already told their stories, which became part of the Museum, can be found around the whole area. Video monologues were broadcast on the screens.

Artefacts of people whose lives were divided into before and after because of the Donbass tragedy attracted a lot of attention: children's toys, office keys, books riddled with shrapnel... each item hid the pain and despair of a particular family. 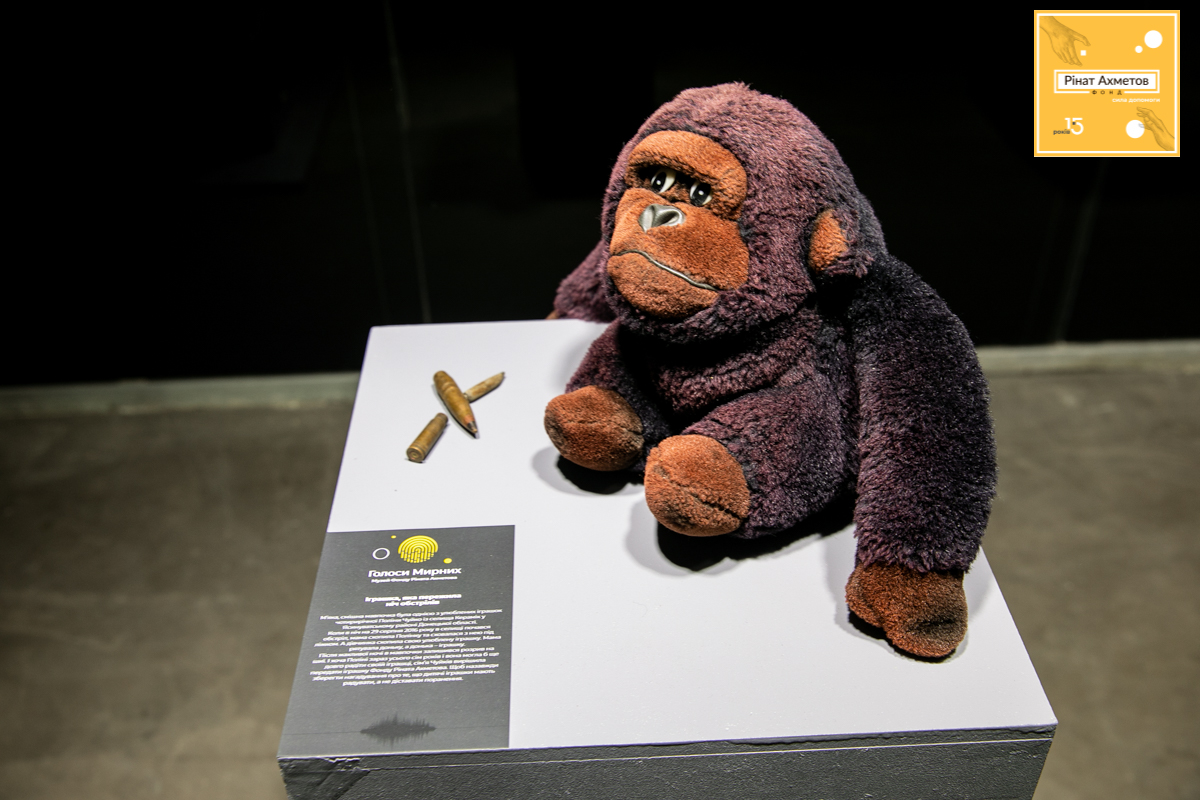 The Civilians' Voices Museum has already gathered the largest collection of civilian stories from Donbass, Ukraine – it includes a thousand testimonies. The task of the Foundation and the Museum is to create the world's main archive of the civilians. It is planned to collect 100,000 testimonies by 2025. However, the big dream is to get a million stories.

"The main purpose of the Museum is to collect, systematize and show the world the testimonies of Donbass residents  who witnessed the war or are experiencing it right now. All stories were first-person narrations, created primarily in the format of video confessions and video interviews. We believe that this way we may preserve voices from the past and present for the sake of a better future," Natalya Yemchenko said.

She believes that the Museum is a space where Civilians can openly tell their personal story and not fear anything. They share their stories to free themselves from the burden of silence and enable people around the world to hear, see, comprehend and live through every confession, going though the story, pain, faith, and hope. 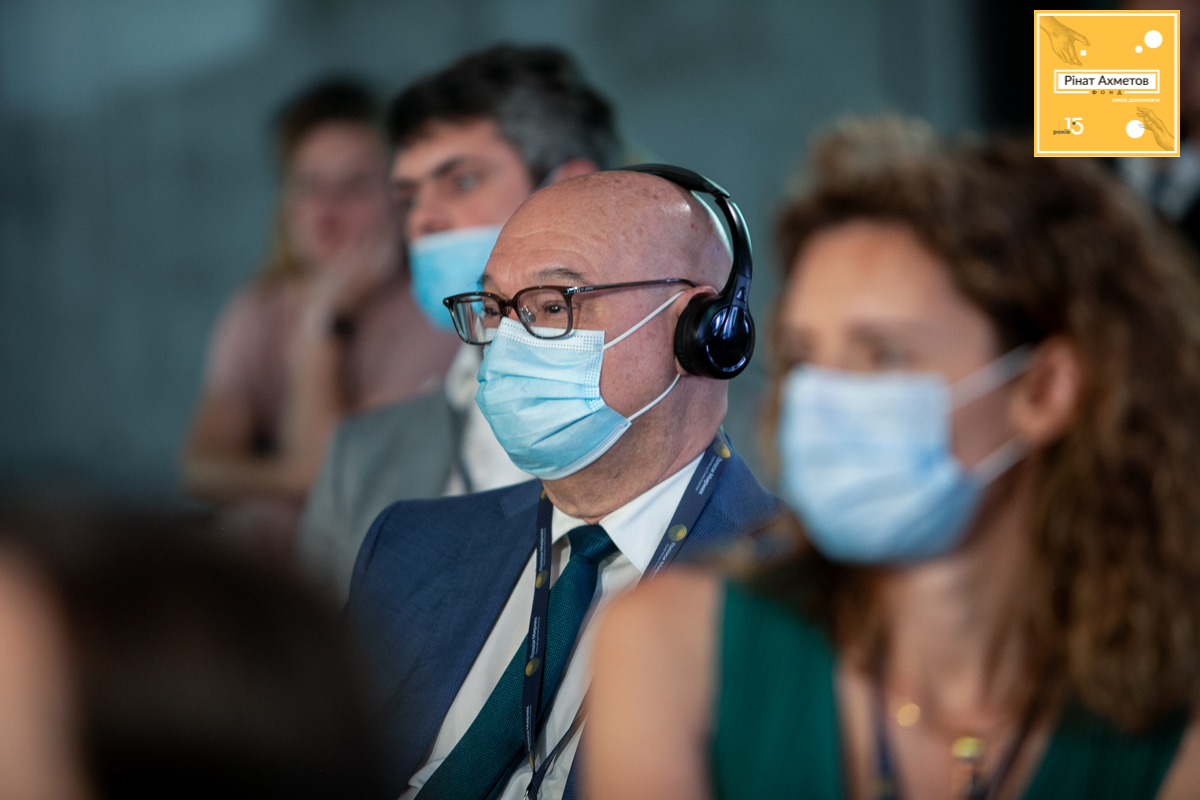 The Foundation's unprecedented documentary project to collect the stories of Civilians started in February 2020, but preparations  began much earlier. The Foundation held consultations with representatives of the scientific community. It conducted hackathons for historians, psychologists, and sociologists to discuss how to objectively and fully document evidence. The Foundation follows global trends, offering to document the conflict in eastern Ukraine based on eyewitness accounts.

Rinat Akhmetov proposed the idea of the Civilians' Voices Museum. The project concept was developed with the participation of reputable Ukrainian and international museum specialists.  One of them is Kevin Bolton, a British brand and web consultant who was  recently engaged with the Liverpool School of Tropical Medicine, as well as a number of European museum projects. The logo and other visual symbols of the Museum combine a human fingerprint and voice diagrams. 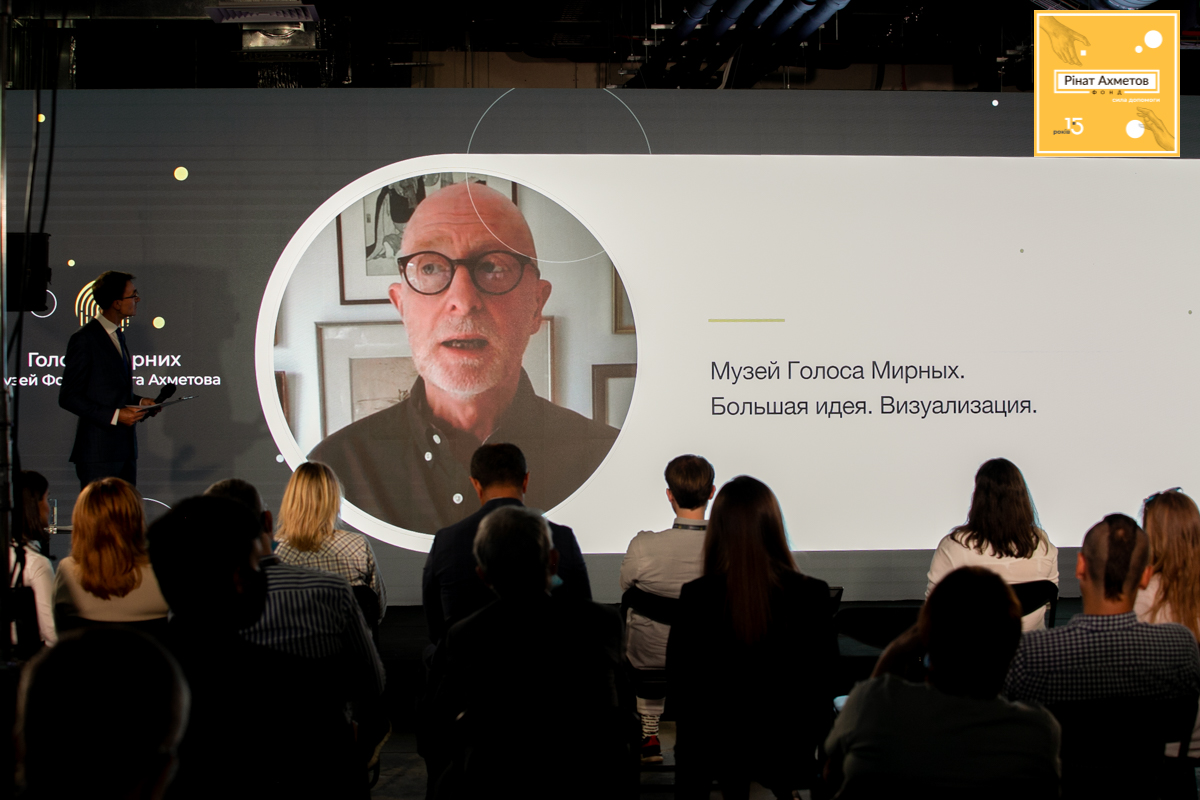 "We wanted to show in visual identity that every story is unique, just like every voice. Before starting to develop the Museum's identity, we received a lot of materials about Donbass from the Rinat Akhmetov Foundation, in particular, the book "Donbass and Civilians", published by the Foundation. People's stories allowed submerging in the context, which helped us work," Kevin Bolton said.

Lizzie Moriarty, a British specialist engaged in museum projects and who collaborates actively with the British Museum, said that the work on the the Rinat Akhmetov Foundation's project will arouse great interest of researchers,

"The Museum's civilian stories will become an important resource for researchers who study and will study the War in Donbass. The huge advantage of the online format is that the materials will be available to everyone anywhere in the world at any time."

One of the first projects of the Museum – Civilians' Voices — was presented  at the event. Olha Huk, chief project editor of the Rinat Akhmetov Foundation, spoke about it in detail. 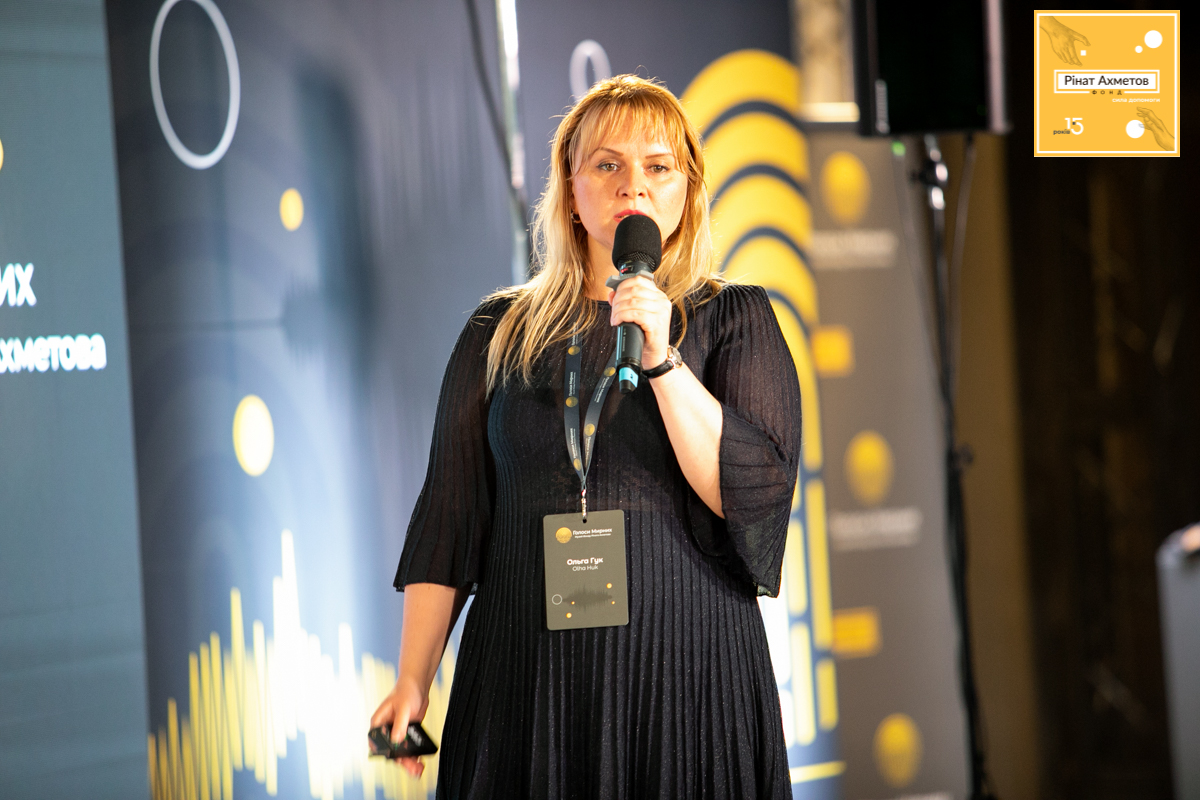 "Collecting stories is a complex and very important process for the characters themselves. Therefore, their personal storytelling is part of working with the 'trauma of war'. That is why, we attract psychologists to collect stories and to compile questionnaires, design interviews, and, thus, to make the portal  functional," Olha Huk said.

Kateryna Vepro, a psychologist and expert at the Rinat Akhmetov Foundation, agrees with her,

"The Museum's portal will make it possible for people to feel that they have not been forgotten. They will understand that their stories are important for others. Of course, it's hard to open up and tell your story, but when a Civilian talks about what happened to him/her, what path he/she went through, it get easier. This platform will also bring together residents of Donbass who are on different sides of the contact line. They will be able to hear each other. This project can be an important step towards establishing peace in  Donbass." 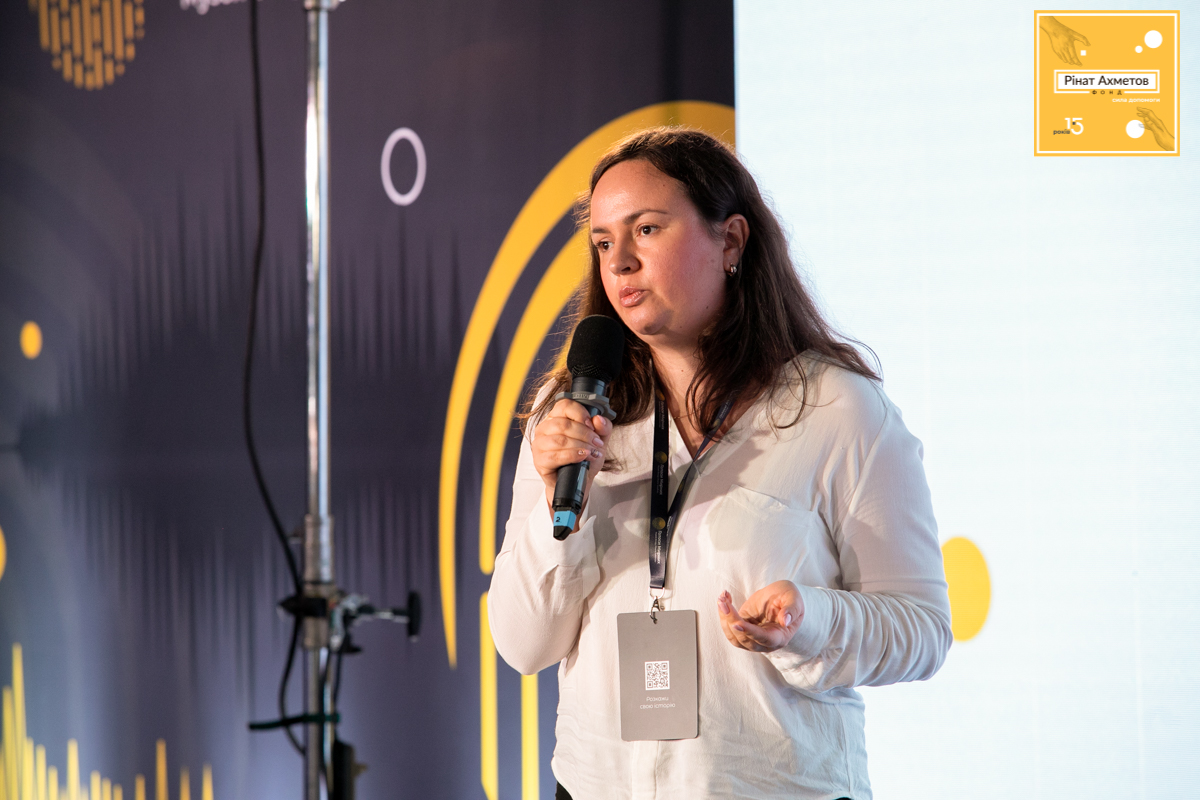 Natalya Yemchenko noted that the Museum will implement projects at the intersection of science, journalism and art. One of the first journalistic projects was called 'Interviews. Civilians' Voices'.

"We will create a collection of 150 interviews of famous Donetsk and Luhansk residents who found themselves in the center of the armed conflict. We will create the first series of such interviews at the opening of the Museum, which takes place in November. We are currently working on choosing an interviewer. Perhaps it will be one of the Foundation's ambassadors," Natalya Yemchenko said.

"Roses are a symbol of Donetsk. We will plant them in the cities of Ukraine every year. The number of roses will correspond to the number of stories told," Natalya Yemchenko added. 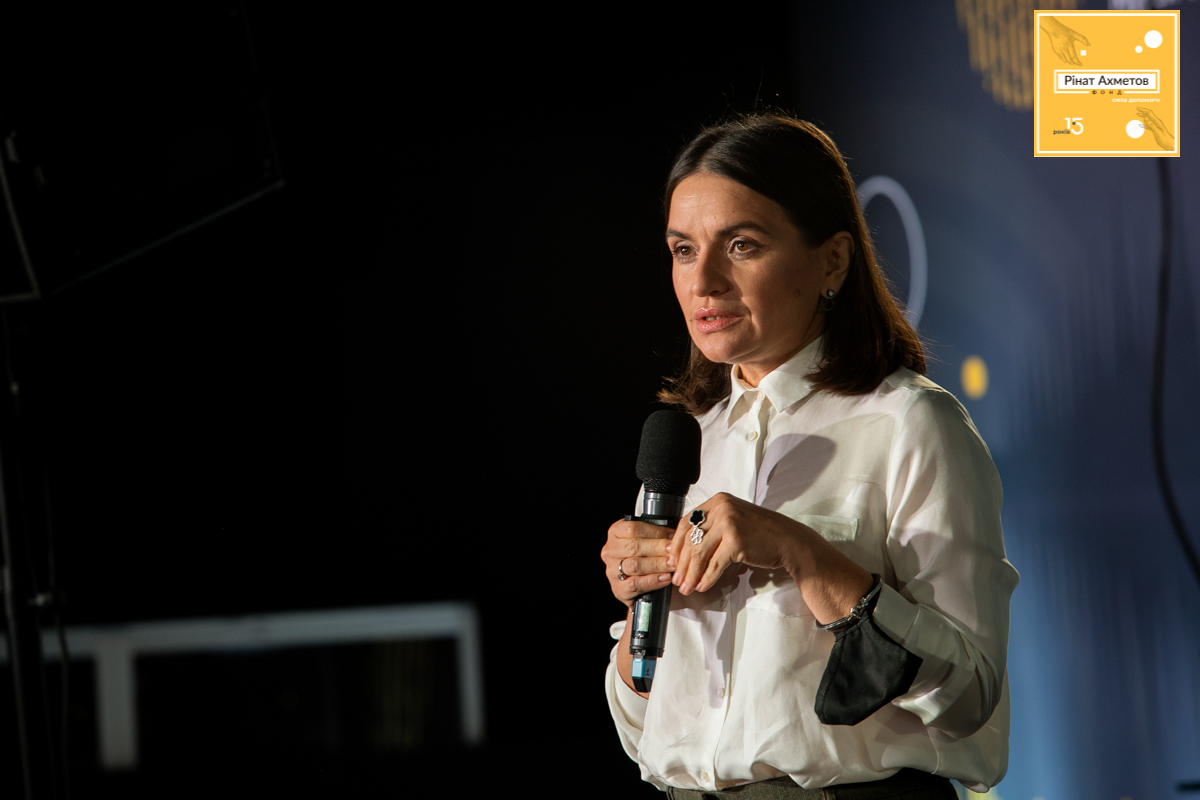 Authenticity and historical value are among the main priorities of the Museum. Therefore, people of science will be involved in the work on the archive. Yevhenii Monastyrskyi, a historian, internal refugee from Luhansk, is the Museum's consultant.

"A human being is at the heart of any war. The testimonies of people are the main source. The serve as the main material for restoring the threads of historical events. The more evidence, the more objective the picture is. It is the dream of any historian to be able to talk to direct participants of such events. We are lucky that so many people are willing and able to share their stories," Yevhenii Monastyrskyi said. 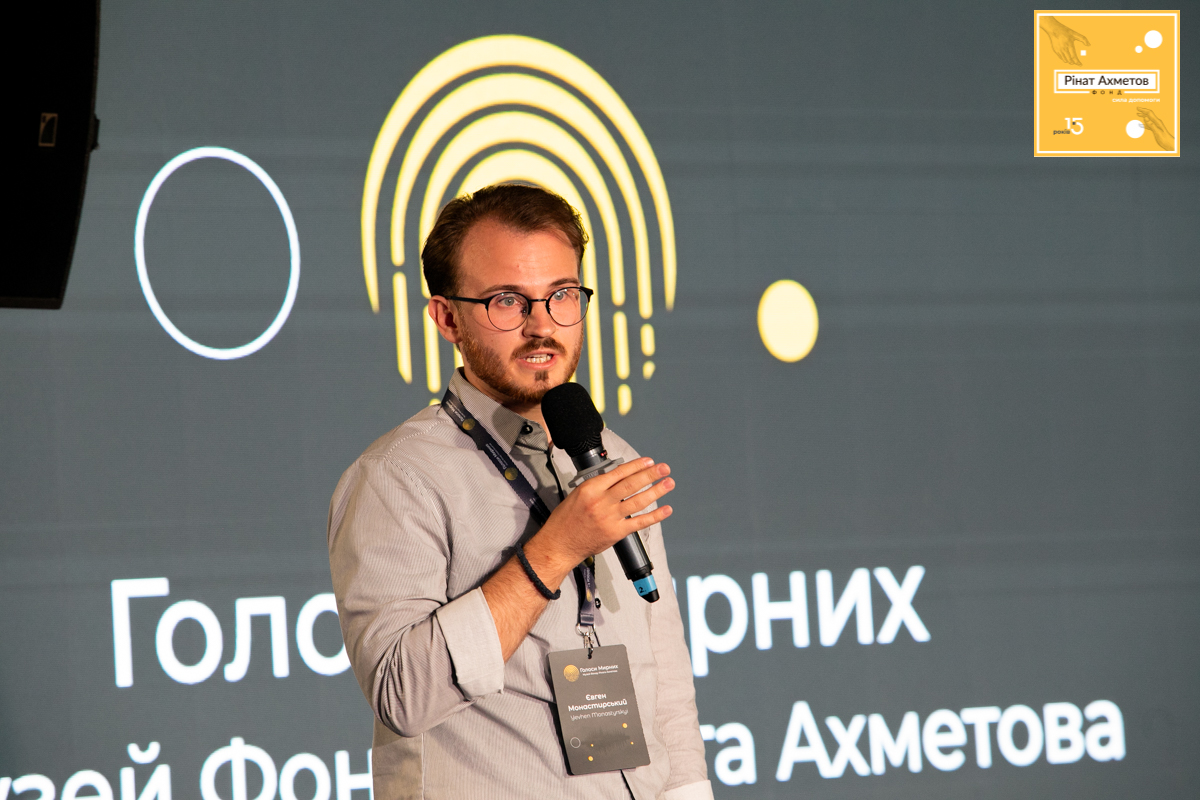 The Civilians' Voices Museum is not just a national project. This is a global project.  It will become a window through which the world community can look to understand the Donbass residents  and form their own idea of the lives of millions of ordinary people who are trapped in this situation.

The stories collected by the Rinat Akhmetov Foundation will be published in the public domain. The online Museum's website will also have a special form for anyone who wants to share their story.

The project will be fully launched in November, but you can share your story now by clicking here.